Nan and Paul 'Fidget' arriving as foot passengers on Sunday to join the merry crowd. Great to see that they had made such an effort to join us, although on this occasion, they could not bring 'Fidget'. (Seven boat owners now joined in the party).

On Monday, in sailed 'French Maid' to Greystones, crossing on their own and this time going to investigate Ireland by car and occasionally coming back to Greystones to "French Maid".

"Bonchellis" was the chosen restaurant that evening for us all which left a whole in our pockets. 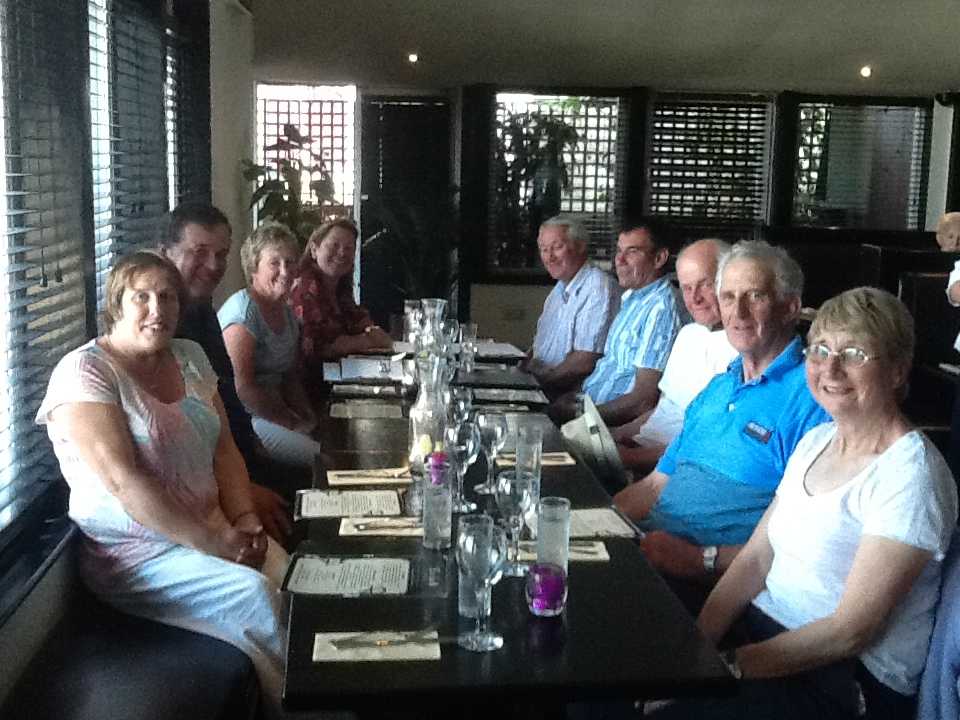 An extra delight the following morning was to see Motor Yacht 'Blue Jay', having done their first crossing last year, now bringing another motor boat along with them 'De Ja Vu' ,arriving on Monday christened by wet spray but the glorious sunshine and welcoming smiles awaiting them. Fine dining at "The Hungry Monk" blew the cobwebs away , although still feeling 'rocking and rolling' after the journey, nothing that a couple of glasses of wine couldn't sort out!

Paul Langford cleaned Blue Jays,sailing boat's prop and speedo, we know this is Paul's excuse to be in the water.

A few 'boat to boat' get togethers took place, as usual, before one or two of the group disbanded on their various journeys. 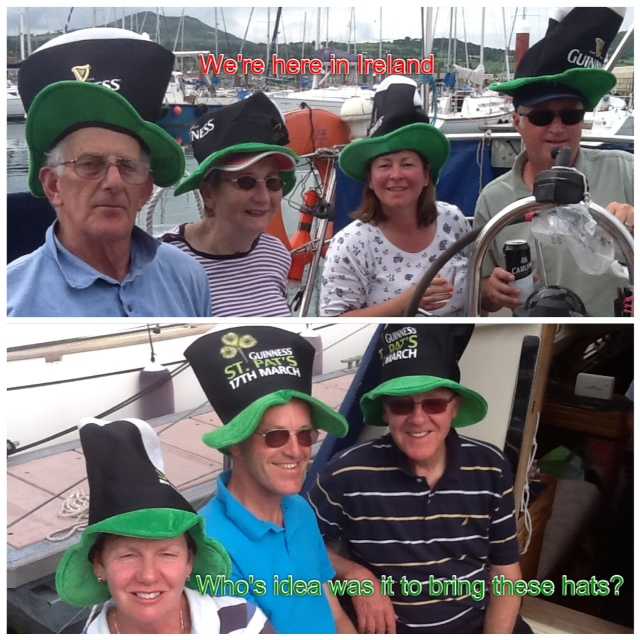 On Tuesday three sailing boats went to Malahide but one boat was crewed by Motor Boat owners, Nan and Paul. Paul complaining that the mast was going to give hime 'tan stripes'!!!! Obviously missing his Fly Deck. Meandering along the bouyed chanel and basking in the sunshine was just amazing. The icing on the cake was a very experienced member of staff at Malahide Marina guiding us all safely into our berths.

On Wednesday night, we had been invited to Malahide Sailing Club for a members 'leaving do'. Ruth joined the festivities by singing a few songs with the harp and then a jamming session with the SC musicians commenced. Jo, Aquaplane was leading the sing song and Bohdan pre planning the next song. I bet Malahide Sailing Club didn't know what had hit them.
As always they spoiled us with food, food and MORE food.
A fantastic welcome for us all. After a very late party a 6a.m. start back to Greystones did not feel very appealing, but had to be done. Except Aquaplane, whom stayed to heal their hangover and their priority of the day was a pint at Gibneys and a Curry Night out. 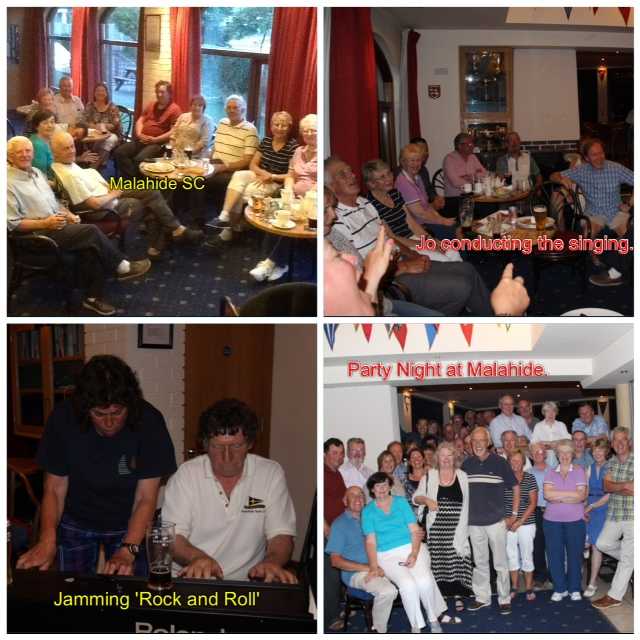 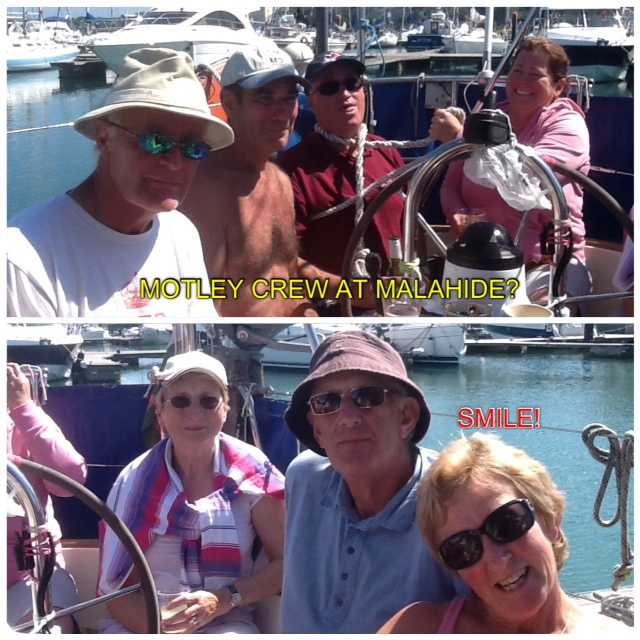 Unfortunately, we were not all at Greystones to welcome 'Supertramp' but sure that a few smiling Pwllheli Cruisers were there to make them feel 'at home' so to speak. It was great that they managed to stay a few more nights so we could catch up with them on our return journey from Malahide.

Whilst Motor Yacht "Blue Jay" was making her way back,meeting fog on their journey , it's hardly any wonder that they didn't see Jake coming the other way. It was A MAJOR achievement for Jake and family on the Motor Yacht "Mako" to accomplish their first crossing over the Irish Sea, in dense fog, in a new boat with a young family, in fact with a few weeks old baby boy Kaelan and of course Olivia. Good for you. Olivia already having training by her Dad to drive the inflatable, her enjoyment was evident with a beaming smile across her face. And oh! How we all wished we had a paddling pool on our boat to cool off out of the 29degree heat. 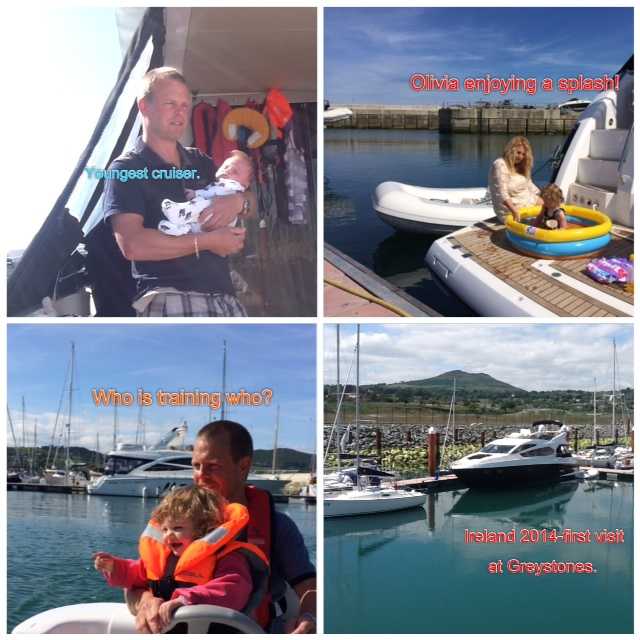 "Last Orders" after spending time at Malahide crossed directly to Holyhead and then home to Pwllheli. A new venture for Chris and Charles. Many 'firsts' ' so to speak' on this cruise for them, CONGRATULATIONS. They had not accomplished this kind of passage before.

Our Pwllheli visitors investigated many eateries, of which are many, in Greystones. You never know, by next year we might have a 'Pwllheli Cruising Places to Eat Guide' at Greystones, Howth and Malahide.

Mike from "Straight Flush" having an "Early Bird" breakfast.

The sailing yachts and motor boaters all joined together on Friday night in "The Beach" Public House as five sailing boats were going back to Pwllheli the following day, pretty envious that "Mako," "Raw Deal"and "De Ja Vu" were going to stay for a further few days. P 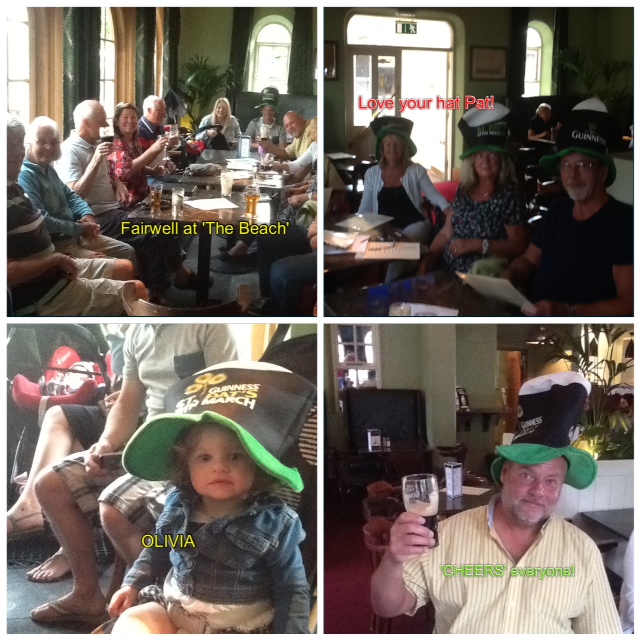 Great to see 'Cruisers' taking advantage of the 'Dart' commuter train all over the East Coast visiting Dublin, Bray, Howth, etc "Let's go for lunch to Howth by Dart" sounds unreal but achievable . Some extending their hols by hiring a car to explore further inland. Others exploring picturesque walks in the area. Sharing restaurant experiences ensured we surely did dine well and definitely 'put on the pounds' so to speak.
Greystones proved to be a safe entrance marina, an excellent place for food and commuting and extremely welcoming and helpful staff.

On the return journey, for the sailing yachts, we had a ladies hour on the radio, on Channel 8, - NO men allowed. This gave confidence to individuals that do not often use the radio sharing navigational positions etc. This proved to be very successful.

The three remaining Motor Yachts arrived safely in harbour on Tuesday having had plenty of 'chilling out' at Greystones and 'spending sprees' in Dublin. Undoubtedly, a return journey will be on the cards.

This trip certainly had a 'Wow' factor and many crossing the Irish Sea for the first time and the talk is 'When are we going back again'. We have been approached by many others at Pwllheli Marina saying "We're coming next time." All the merrier. An increase of 55% of boats on last years cruise already.

We were blessed by glorious sunshine and great socialising right through the week with our cruising friends from Pwllheli.