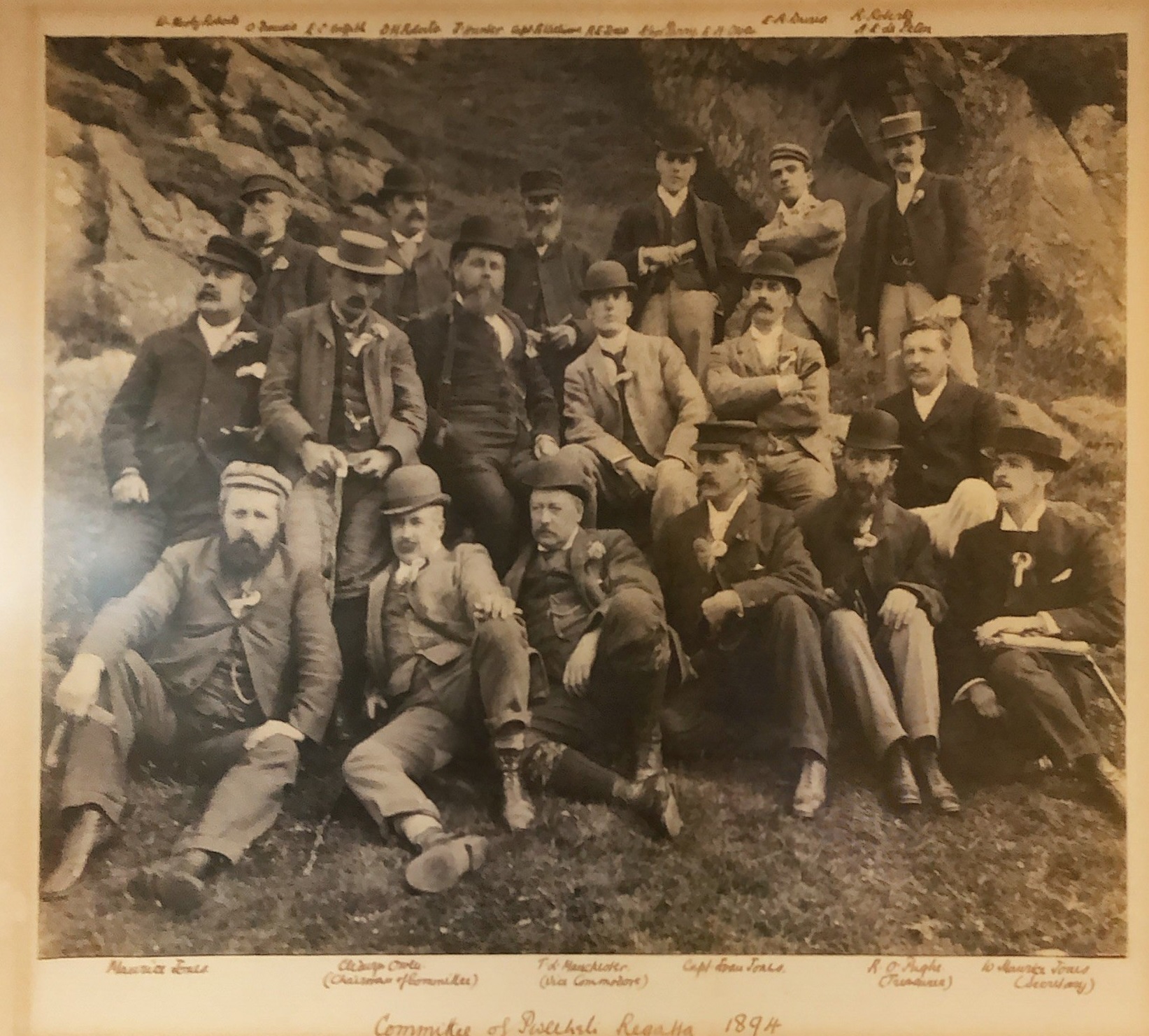 The Committee
Back two rows:
W. Newby Roberts Possibly William Newby-Roberts, of Rusholme, Manchester. A ‘Newby Roberts’ was described in 1895 as ‘formerly of Pwllheli.’
O. Francis (c1832-1919) Owen Francis was a Prudential Insurance collector who lived in Church Terrace, next door to Cledwyn Owen, and later in Cardiff Road. He was on the Committee of the Primrose League.
E.J. Griffith
D.H. Roberts
J. Hunter John Hunter was a builder and contractor. After his business failed in 1898 he was the local agent for Peter Edwards of Dudleston, Chester, who was the contractor for building the new Town Hall and the Gas Works Manager’s house (Villa Marina). Hunter was a partner in the Porth Neigwl Brickworks and the brickworks at Brynhunog, Llannor. Among other work, he also built seven houses and a shop in Sand St, probably numbers 51-65, and Tremfan Hall in Llanbedrog.

R.E. Jones
A. Ivor Parry (c1875-1950) The son of the solicitor R. Ivor Parry (c1843-1918), a councillor and Mayor of Pwllheli, who was made bankrupt in August 1894. Alfred was himself a solicitor, later in Pontypridd. He represented Messrs Davies and Jones (see below), creditors, in the bankruptcy proceedings of John Hunter (see above). Secretary of the Caernarfon Liberal Association and a golfing-partner of David Lloyd George. Assistant Divisional Commissioner, Food Control, for South Wales in the Great War. Gambling debts led him to disaster.
E.H. Owen Possibly Evan H. Owen (c1867-), yeast-dealer, Berlin House, Mitre Square. There was also an auctioneer in Caernarfon of the same name.

E.R. Davis Evan R. Davies (1870-1934) was a solicitor who held a number of posts in local government, including that of Pwllheli Town Clerk and later Mayor. He was a local agent for the MP David Lloyd George in 1905 (Davies’s second cousin Philip married Lloyd George’s sister), and Secretary of the Carnarvonshire War Agricultural Committee during the War. From 1931 to 1934 he was Chairman and Manager of the Ffestiniog Railway, and also invested in that company, and in the Snowdon Mountain Railway. When John Hunter was made bankrupt Davies acted for him. He was the son of the Revd David Evan Davies (c1842-1914), who was one of the promoters of the development of South Beach. (There is an obituary at Yr Herald Cymraeg 22nd September 1914 t5). In 1896 both father and son were on the Pwllheli Town Council, and both were promoters of the Pwllheli Sanatorium Company Ltd, which proposed an establishment on the seashore to operate the cure promoted by John Joseph Hartnett (author of Antiseptic Dry-air Treatment of Consumption), but which failed in 1897.

Maurice Jones A man of this name, an ironmonger, lived at 14 Salem Terrace in 1901. Perhaps he was a partner in the prominent business of Davies and Jones, Madoc Buildings, New St.
Cledwyn Owen (c1852-1910) Solicitor, for about 36 years magistrates’ clerk, &c. His father, Owen Owen, was magistrates’ clerk before him. Mayor of Pwllheli in 1898. He lived at Llwynhudol, and was for upwards of twenty years leader of the Conservative party at Pwllheli.

T.L. Manchester (c1852-1916). Secretary of the South Caerns branch of the Lifeboat Institution (1909). He lived at Pont y Gribin, Llannor, in 1881, and was Chairman of the committee for the Pwllheli Regatta held in that year. Later he moved to Westfield, Abererch Road, Pwllheli. http://petermanchester.me.uk/index.php?page=manchester says that Thomas Lee Manchester’s father was a spinner from Manchester.

Capt Evan Jones (c1851-) Capt Jones, Post Office, had charge of all the local lifeboats in 1898. In 1891 he was a retired master mariner, living in the Post Office, Penlan Street, where his solicitor brother-in-law Owen Robyns Owen was the head of the household, and his sister Laura was the postmaster. In 1901 the household had moved to Henblas, High St (the former Madryn Arms, next to the NatWest Bank). The Pwllheli lifeboat station was established in 1891.

R.O. Pughe (c1843-) Rice Owen Pughe was a chemist, druggist and dentist, of the ‘Medical Hall’. He was chairman of the cricket club formed in 1870, and breeder of champion Welsh terriers.

W. Maurice Jones (c1867-) The Secretary of the Regatta. Auctioneer, the son of William Jones, Allt Felen, Llannor. His wife Rhoda, who had died in childbirth the previous January at only 22, was the daughter of Mr and Mrs Carreg, Cefn Mine. In 1895 he went to work for Wm Dew in Bangor.


What the Paper said:

PWLLHELI. Fair weather and plenty of wind made the Pwllheli Regatta a grand success on Bank Holiday. Thousands of people came to see the interesting events of the day. The yacht races were most exciting, and Captain Rees Williams is to be complimented on the victory of his yacht over some of the known crack boats in the race. The programme was a capital one, and Mr W. Maurice Jones, the secretary, was heart and soul in the work, and never grew tired in his effort to make the regatta a success. He was ably assisted by a practical committee.

The grand success of this year’s proceedings ought to convince the committee of the wisdom of going in for another regatta next year. The regatta over, the committee were photographed on board Captain Rees Williams’s yacht.

The following is a list of the prize winners:—

ROWING BOATS’ RACES. Four-oared boats: 1, Anna Maria, Pwllheli Rowing Club; 2, Wave, Owen Jones, Pwllheli; 3, Mary, do. Pair-oared boats (two oarsmen and cox): 1, Lilly, Owen Jones, Pwllheli; 2, Daisy, do. Pair-oared boats (one rower and a cox): 1, May, Owen Jones 2, Lucy, R. Wright. Pair-oared boats (one rower without cox) 1, Owen Jones; 2, R. Wright; 3, W. Thomas, Canoe race: 1, O. Jones; 2, O. W. Jones; 3, Peter Davies.
SWIMMING. First class: 1, R. Baxter, Pwllheli; 2, J. O. Jones, do.; 3, A. Bamford, Criccieth. Second class: 1, T. O. Ellis, Pwllheli; 2, T. B. Bracken, Criccieth; 3, W. James. Diving 1, A. E. Le Paton (who gave the prize of 10s 6d to the regatta fund).
ATHLETIC SPORTS. Hundred yards flat race: 1, R. Owen, Pwllheli; 2, James Jones, do. Hundred yards flat race for boys 1, W. Williams; 2, J. Thomas; 3, W. Mason Roberts. Putting the weight: 1, W. Maurice Jones 2, A. E. Le Paton. Tug of war: 1, Pwllheli Town Band. There were also several minor events, including sack, three-legged, &c., races, climbing the greasy pole, &c. In the evening the committee and friends sat down to a sumptuous dinner in the South Beach Hotel, the proprietors of which establishment catered splendidly to the satisfaction of all present. Mr Cledwyn Owen was the chairman of the evening, in the absence of Major Lloyd Evans. The Chairman, in proposing the toast of the evening, “Success to the Pwllheli Regatta,” said that somebody had remarked that Pwllheli was not a fit place in which to hold a regatta, but he was proud to say that Pwllheli had proved itself to be one of the best places for such a purpose. The town certainly had drawbacks, but in time these would be done away with, and Pwllheli would become the Brighton of Wales.
Carnarvon and Denbigh Herald and North and South Wales Independent 10th August 1894 p5.

This page was updated 27th February 2019