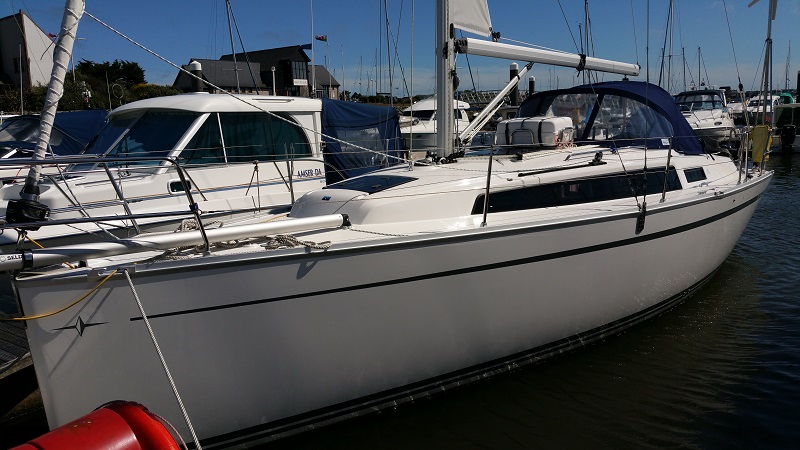 There are now two boats going on this cruise: Hummingbird 2 and Brival, a Moody 346 and the following is Tony's latest plans.

“June is traditionally the best month to visit Scotland for weather - and the month when the days are longest - in some parts of Scotland you can still read a newspaper outside at midnight.”

OK. I’m trying to sell the trip to you. Why? Because I care about sharing the good fortune of owning a boat and the enjoyment it brings.

This year’s SOY sail can be broken down into four stages really.

First stage (10 days) is starting from Pwllheli on Saturday 2nd June heading for Ardglass, making use of the great wodge of slack water on the west side of the Irish Sea. This is a ninety mile sail, well in excess of a qualifying passage for the RYA and if you choose to act as skipper (speak up early so you can influence the planning) a really good day/night sail where COLREGS mean something with the north south large ship traffic.

After Ardglass we make use of the tide to sail up to Bangor. We could anchor in the lee of Copeland Island at the mouth of Belfast Lough but if the wind is from the SW it is better to anchor in the sheltered bay next to Bangor marina.

From there we head north across to Lough and up past Larne, the Maiden light house, the impressive cliffs of NE Ireland and enter the North Passage to Rathlin Island where timing is crucial so as not to be swept backwards or round to Ballycastle.

leaving Rathlin with it’s upside down lighthouse and abundant bird life we again head north just skirting the TSS, enter the Sound of Islay and anchor at the Bunnahabhain distillery, waiting for the right time to sail along the west coast of Jura to Loch Tarbert, one of the most beautiful, remote, yet sheltered anchorages of the Inner Hebrides where after pilotage to anchor in the Inner Loch we explore the upper loch in the dinghies.

From Tarbert it is a short sail to Pigs bay, just south of the tip of Jura and a walk round the headland to see the troubled water of the Corryvreckan.

It will then be time to refuel, water and victual at Oban or Tobermory.

The second stage will take us round the north of mull and then south to Staffa with Fingal’s Cave, can we get ashore this time? From there if the tide is right we sail through the Sound of Iona to Tinkers Hole and David Belfour’s bay, a superb snorkelling spot with a wet suit.

Third Stage north round Ardnamurchan Point, the most westerly of the British mainland to Loch Scavaig on the south west corner of Skye ‘the most spectacular anchorage in Western Europe’ according to some of the pilot books and if time allows to The Forge at Inverie, the most remote pup in the UK before returning to Tobermory/Oban to prepare and victual for the journey home.

The fourth stage is the journey home, this time down the east coast of Jura stopping at Craighouse after passing the farmhouse where George Orwell wrote 1984, maybe taking in Peel on the Isle of Man and hopefully returning to Pwllheli for 1st July.

Obviously all this planning depends on the weather. Plans can change – but we have a plan.

There are several stretches within the month that qualify for RYA logbooks and plenty of opportunity to practice pilotage, navigation and sailing skills with miles both day and night.

That’s the plan but obviously weather conditions dictate where and when we go.

Please note CHPSC Disclaimer: This is not a CHPSC event and the information is provided in good faith. It is for the participants to sdatisfy themselves about the boats, equipment and their suitability for the planned event.