Tony Barlow, owner of Hummingbird 2 a 2015 Bavaria Cruiser 33, dedicating his sail round Fastnet to his brother. 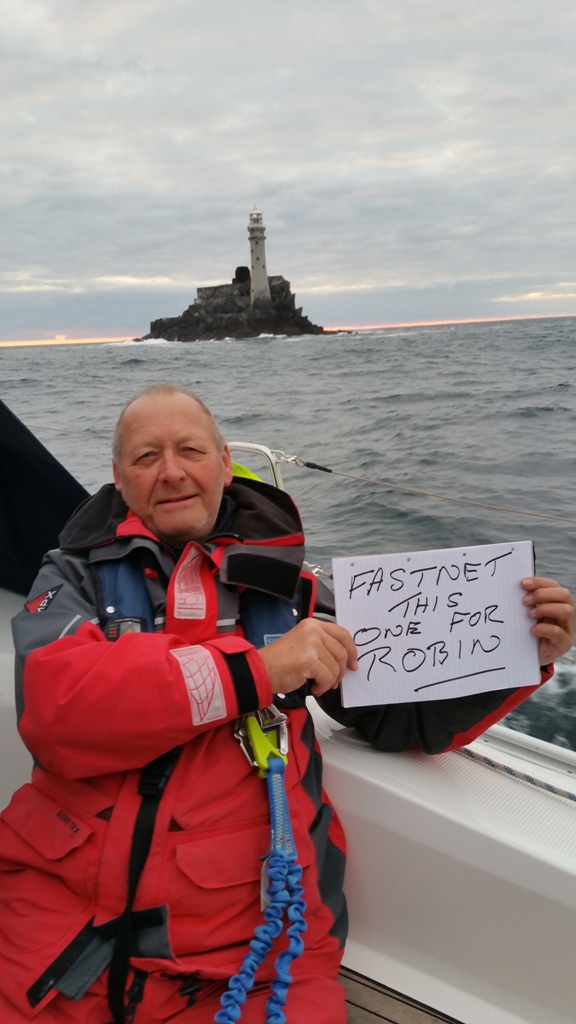 An October sail round Fastnet was a worthwhile punt on the weather and it would have been good to sail in company but others said 'October, round Fastnet? No thank you'. It was to be the last sail of the season and it was something I wanted to do for several reasons, I hoped for the best. Three good friends from our sailing group  shropshireoffshoreyachting.org  Mike Carter, Francis Turner and Neil Stonehouse stepped up and the trip was planned.

The hoped for weather window appeared so leaving Pwllheli at 9 am suited  to catch the south going tide at Tuskar and arrive at Kilmore Quay at dawn, on to Crosshaven, round the rock to Baltimore, into Kinsale and Kilmore again and home to Pwllheli.

The north West Point of the TSS at Tuskar was our first way point, just missed as the tide carried us south, not a problem but an annoyance that we didn't get it quite right. Passed South Rock and Barrels through the night to St. Patrick's bridge with the Kilmore SWB beyond at dawn.

I always seem to be more alive when crossing a shipping lane or entering a harbour in the dark, seeing the single white light to port, waiting for the green, then the white lights one above the other. Will it observe COLREGS? Then the red, and green coming straight for us before the green fades and red shows to confirm they have seen us and changed to run behind.

Ships coming from starboard cause more concern. Have they recognised that we are a yacht or even seen us? Do they risk passing in front with distance to spare or do we alter course to ensure we pass behind. If we alter course to pass behind and they do the same? Constant watching and hoping that in the great scheme of things everyone plays their part but ready to react if they don't.

AIS and radar help but nothing compares with eye ball tracking other vessels until there is no possibility of danger.

My third time of entering Kilmore and not as tense as the first or even the second when it was too windy within to moor without being under the protection of the south wall. The leading lights to keep us clear of a starboard side rock are in line but the sector light shows red until quite close to the entrance which is well hidden and dark unless a well-lit mussel boat is moored, sometimes even two are there making the passage into the harbour entrance very narrow.

We like Kilmore Quay. A port that seems to cater for all, the sandy beach for the family, the working fishing harbour catering for both small lobster and large mussel boats, the welcoming staff at the marina for visiting yachts and of course the excellent restaurants although to my distress 'Crazy Crabs' has closed down.

By the time we left Kilmore Quay, the weather had improved so much we decided to bypass a planned stop at Crosshaven, home of the oldest yacht club in the world so the place arrivals and departures have to be just right and head straight for the Rock saving us a good twenty four hours, a decision fortuitous for us later on.

All that afternoon we were accompanied by a score or more of dolphins, obviously enjoying themselves aiming eight abreast charging the boat from all directions and frolicking at the bow while Francis entertained us playing his penny whistle and I cooked pancakes, always a boost between meals for an ever hungry crew.

Spectacular during the day but night time brought the show of a lifetime. Phosphoresce aided a sight difficult to replicate in a Disney epic. This was real and nature at its best. Not only did the boat look rocket powered because of the propeller in the phosphoresce, the nose and fins of the speeding dolphins seemed on fire and the yards of glowing tail following them was equal to any Fantasia scene. It was impossible to capture the hours of glowing sparkling scenes on our cameras that we were privileged to see but the experience will remain with us for ever.

Fastnet appeared right on que, it's light appearing on the horizon at dawn, timing perfect as if it had been planned. For me a pilgrimage, something my brother Robin who used to be a captain would have loved to have done and with the circle of the rock and photographs completed, a course was set for Baltimore where we moored to the inside harbour wall, all satisfied and my dedicated mission accomplished. 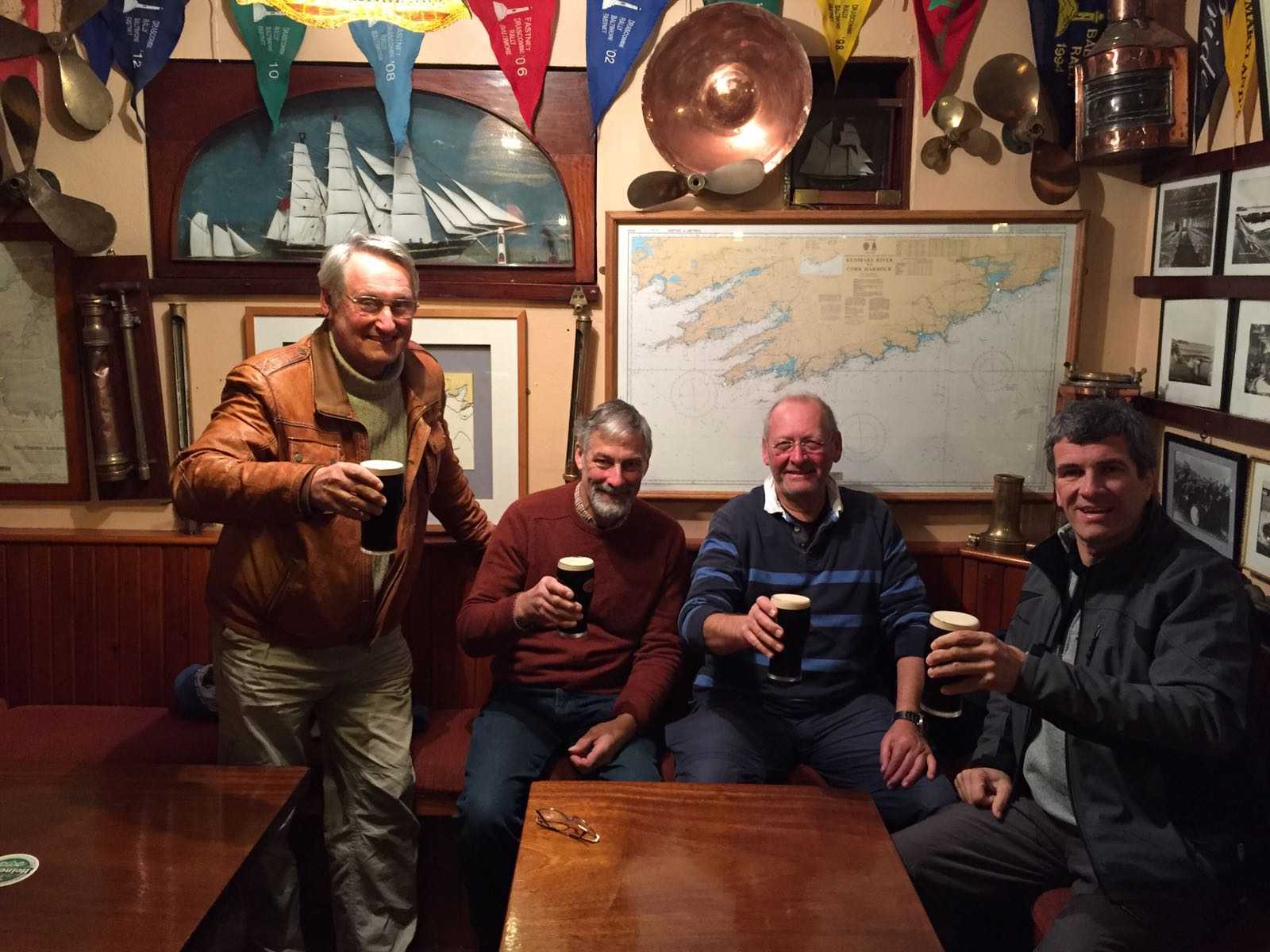 Arriving at Kinsale at night after an uneventful day we moored and slept before eating at my favourite restaurant Fishy Fishy, the fish pie being without equal, the bisque and fish soup up there with the best. Why is it that the Irish have so much to teach us about friendly harbour staff and excellent restaurants near where we park the boat, some of our own marinas have a lot to learn from such good neighbours.

While sailing passed Cork the next day the radio alarm sounded with a mayday relay. The Cork coast guard voiced that they had received a mayday from a yacht with engine trouble and sinking fast off Roche's Points. It was from a VHF and an engine could be heard in the background, enough detail was given to treat the message seriously so a search by a helicopter and three lifeboats was instigated.

As we should, we kept radio silence and hoped that they would not think that we were sailing passed the incident without caring but very soon we were seen by the coast guard because of our AIS and were asked to keep a lookout. We changed direction towards Power Head on a course that looked like it wasn't being searched before continuing to Kilmore.

After several hours of searching by helicopter, three lifeboats, ourselves and many local boats both commercial and pleasure, the coast guard, having found that some facts did not add up and nothing found even after extending the area down the coast, reluctantly with caution, called off the search.

We later heard that the mayday was a hoax. How much time, effort, nervous energy and fuel did those idiots cause? I am sure that when they were caught their punishment did not reflect the true costs involved.

Our course resumed to Kilmore Quay and because of the search we were several hours behind. The wind direction meant a long tack towards Youghal so that an opposite tack could get us round Hook Head. Did I mention we had AIS? Nina my wife could not make this particular trip and she, along with a couple of other wives followed us on the home computers and near the end of the tack across the bay this 'Angel in the sky' phoned to say, a little concerned because it was dark, "You need to tack - you're getting very near to the land". 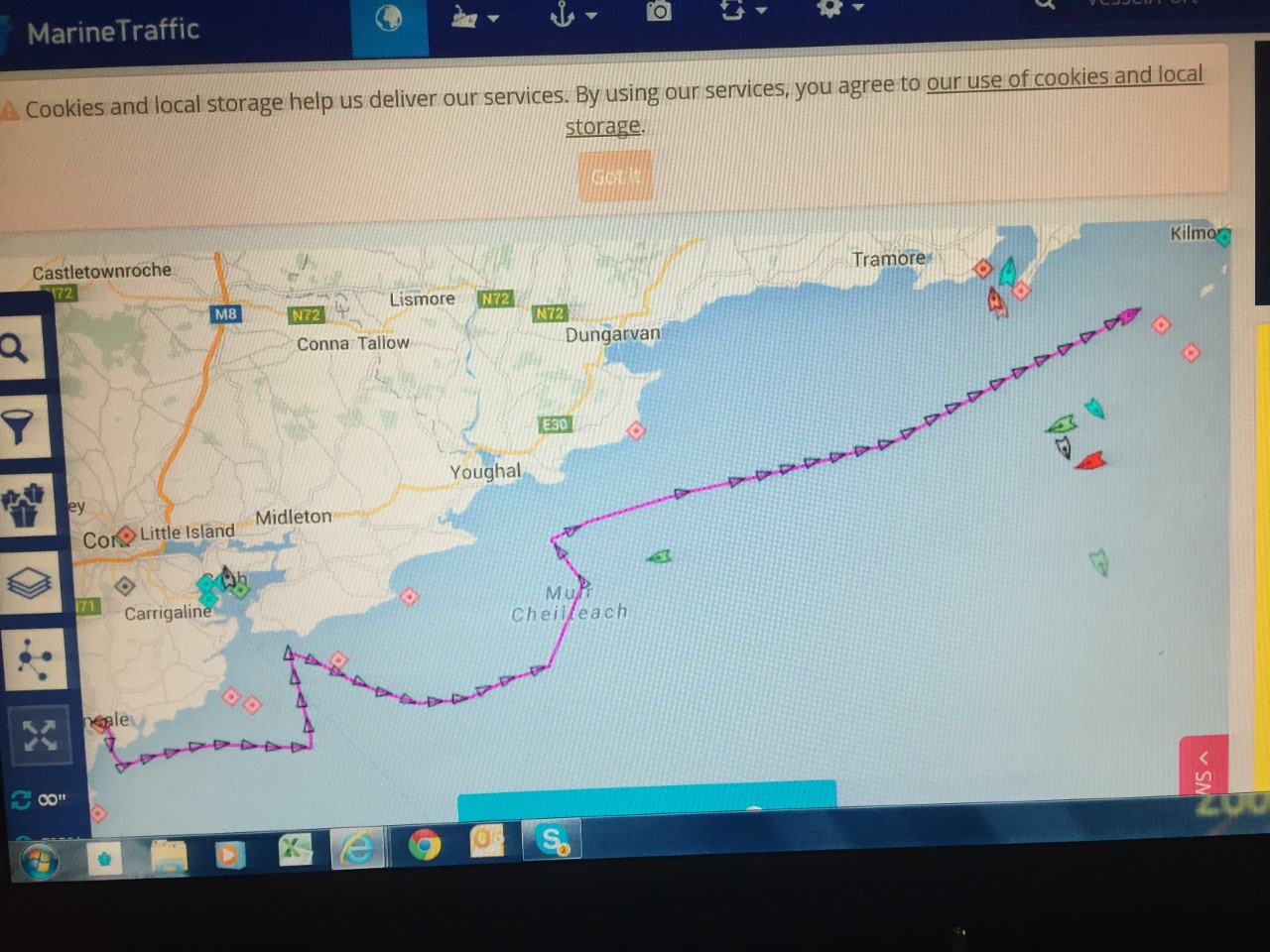 Our last leg back home to Pwllheli started with the most beautiful morning we could wish for, blue sky and a force two as we crossed over the St. Patrick's Bridge, dodging pot buoys with their long lengths of floating line, aiming for a direct route inside Barrels and Tuskar Rock, pancakes for everyone before lunch making for double satisfaction, full tums and a job well done - nearly.

A full 24 hours ahead of schedule, as we approached south of Bardsey aiming to miss the shallows of Devils Tail, the weather confirmed the forecast and resorted to the usual SW. With the wind increasing and the waves on the quarter skewing the boat uncomfortably it confirmed that our decision to gain time earlier by missing out Crosshaven was a good one.

Pwllheli entrance with it's training wall sometimes completely under water and out of site is wide enough but at low tide the width is drastically reduced and with a strong SW not the place I wanted to be after midnight, especially with three green cans unlit. Unlike a previous time when we had to be still clipped on well inside the harbour we readied for mooring, not my best with the wind blowing us off the pontoon.