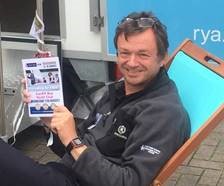 RYA Cymru Wales is very saddened to announce the passing of chief executive Phil Braden too early in life after a battle with cancer. He leaves behind a wife Deborah and two young daughters.

Phil took over the helm of Welsh boating in February, 2016, after a top-level career as a global telecoms executive. He was a lifelong sailor and had sector experience as the commodore of Llandudno sailing club.

One of his biggest continuing initiatives will be the All Afloat charity which he initiated and launched to help provide boating opportunities for disadvantaged young people throughout Wales, equipping them with life skills to transform lives. It was launched in May, 2017 and will be a significant legacy of Phil’s time in charge.

He said at the time, “All Afloat’s vision is to transform lives through the power of boating”.

“We provide those from minority and disadvantaged backgrounds the opportunity not just to try boating, but also a pathway to become proficient and make it into a lifelong passion.”
After initial funding from RYA Cymru Wales, the charity raises money to provide hundreds of first time experience sessions and certify hundreds of young sailors through RYA recognised sailing centres and clubs.

Phil combined top level business expertise with a love of the sport of sailing, especially on the North Wales coast, after himself taking up the sport as a child.

He was an electronics engineer in the telecoms industry – in 2008 he was voted one of the 50 most influential persons in European Media by Cable & Satellite Magazine.

He has been a chief executive or chief technical officer for various companies in Hong Kong, the United States, the Middle East, Italy and the Netherlands, but for much of that time he kept a base in North Wales and continued his love of sailing.

RYA Cymru Wales chairman and All Afloat trustee Mike Butterfield said, “ A man of vision and talent unexpected in an organization like ours. The confidence to simplify procedures, a heart that touched all he met. Developing out of the box visions like All Afloat, and Proposal Rhyl, a revitalization of the marine lake, for Salability, and securing external partner funding. of over 40K. We hope to deliver on his legacy by fulfilling the promise of these projects.”

The funeral is to be held on Friday 15th February at Mochdre Crematorium at 11.45am, followed by the wake at Llandudno Sailing Club. Donations to Awyr Las https://awyrlas.org.uk/ and/ or St David’s Hospice.