By Victoria Cox and also featured in Y&Y here 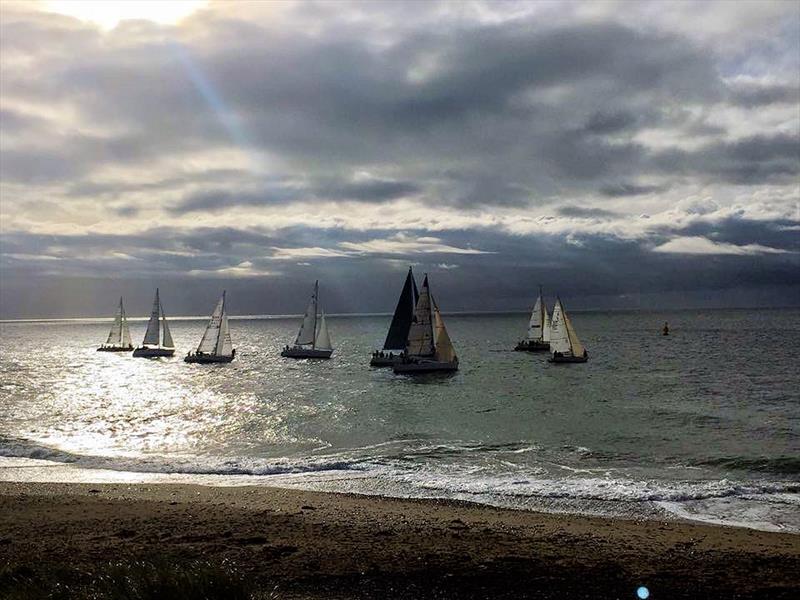 The weekend had been forecast to consist of two extremes with heavy winds from the remains of Lee and Maria on Saturday followed with very light winds on Sunday. But the heavy winds came through over Friday night leaving Saturday with maximum gusts of just 16-17kts, dying off to 6-14 for the second race. 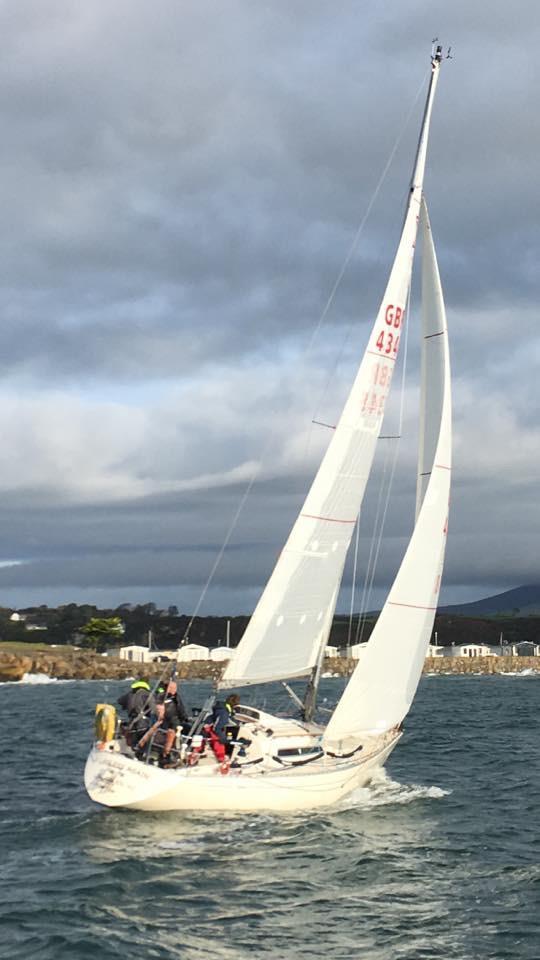 The first start saw everyone eager to get started but far too eager for the strong tide taking everyone over the start time. Pariaba crossed the start line first followed by both Jac y Do and Honey Bee coming in at the pin end followed by Mojito mid line. All four boats were fully over the start line by the time the gun went and all four were called to return. Meanwhile Theia, Legless Again and Sanderling got good clear starts as the others returned. A quick turn around was made and everyone headed to the first mark - no 2, creating many luffing matches as the faster boats returned past the fleet. Sanderling significantly luffing up Mojito to protect their wind on the way but eventually the J109 had more speed on the beat and were able to quickly overtake and head to the mark.

Kites got launched as the wind dropped off. Valkyrie and Legless Again we're making significant ground on Mojito but as Mojito gybed to the next Mark they suddenly picked up pace and pulled away from the fleet, a position they maintained all way round taking line honours and 1st overall. Legless Again had a strong performance giving them 2nd overall and 1st in class 2 with Jac y Do behind them in 3rd place and 2nd in Class 2. Will Partington's Honey Bee took 3rd in class 2 with Valkyrie taking 2nd in Class 1.

Race two and Legless Again got a perfectly timed start, evident from the starting line video which was viewed by all with gasps and cheers in the bar later. Any further forward and they would have been over. As winds dropped, Mark And Jo Thompson's J80 Jac y Do gained good ground on Mojito but couldn't quite maintain enough in the end, finishing just 32 seconds behind on corrected. With reduced winds both Darling and Valkyrie decided to retire and head in for the day.

With Lee and Maria well out of the way on Sunday, the fleet were left with very little wind and AP was flown. As wind filled in race officer Robin Evens tried his best to set a course but as soon as it was announced the wind shut off and for Pariaba, Valkyrie, Darling and Jebus the suspense was all too much and they retired from racing. For those patient enough to stay out, the wind did fill in to give some good racing, testing everyone's skills in the light airs. Tim Rouse, Sailing Theia single handed, got an exceptional start, using the tide pulling the fleet over the line to his advantage, sitting on the line then turning round on the start gun and away he went. Mojito rounded the windward mark first and hoisted their kite just as the wind shut off, allowing Diva, Honey Bee, Legless Again and Jac y Do to pass them. They managed to get the boat going and pull back the race to take another 1st in the series followed by Jac y Do and Honey Bee who also took 1st and 2nd in Class 2 with Legless Again taking 3rd in their class while Diva took a comfortable 2nd in Class 1.

Reducing winds saw more of the fleet retire but Robin managed to set another course for the remaining fleet. Again Mojito parked at the first mark and the fleet passed them. Diva also suffered in the lighter winds so decided to retire. Although Mojito managed to get ahead they were unable to shake the excellently sailed Legless Again who took 1st place overall and in class 2. Failing to make the ground needed Mojito had to settle for 3rd place behind Honey Bee with Jac y Do behind them taking 3rd in class 2.

Full results for the series can be found here

It's still all to play for in the remaining two weekends with more discards kicking in. Come and join us next on the 21st and 22nd October followed by the series finals and Autumn supper and party on the 28th and 29th October.