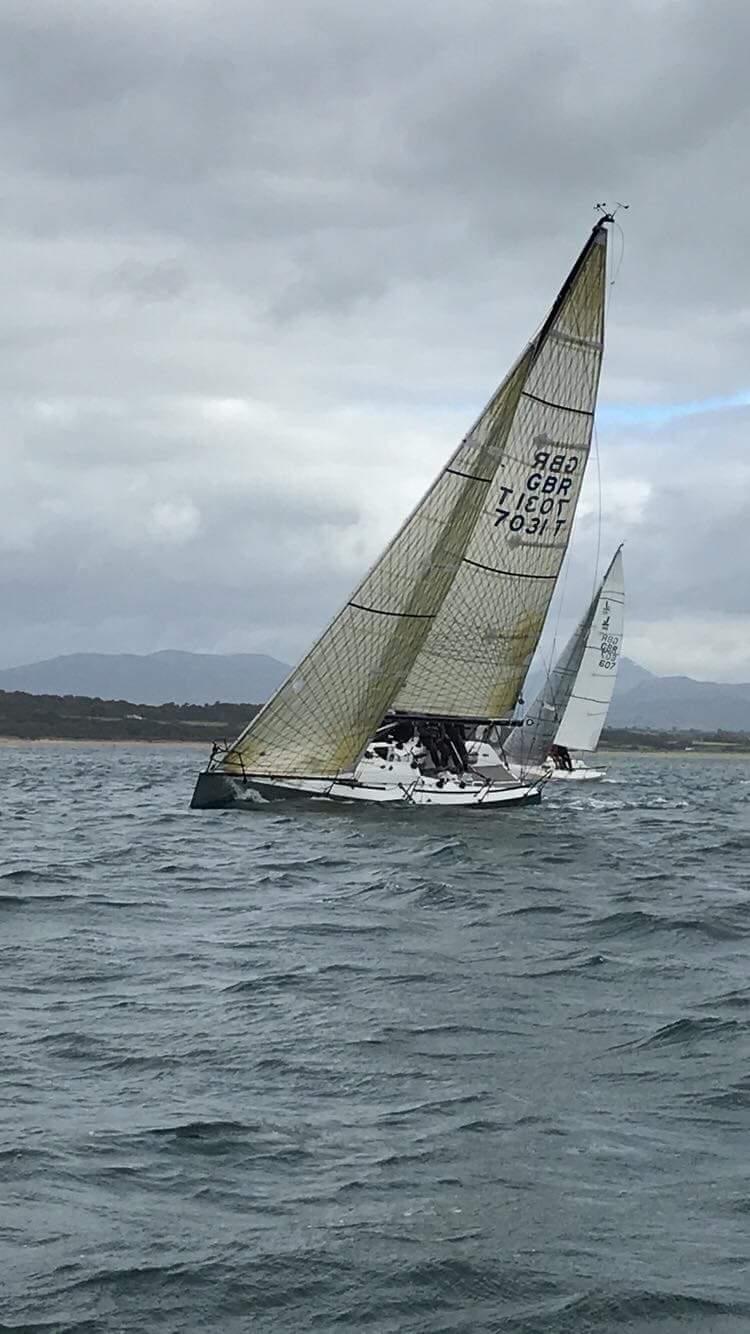 After a chilly night the fleet were welcomed by warm sunshine and very little wind for the second weekend of the Autumn and Pwllheli Challenge series.

As the wind build from the south, the race officer Robin Evans was eager to get the fleet away. However, the fleet had not factored in the tide pushing them over the start line and with such a large fleet the race officer was unable to determine which boats were over, so was forced to call a general recall. A keen fleet resulted in a second general recall, allowing the wind to build to a pleasant 6-8kts by the time they finally got away.

Mojito barging in on the start line between fellow J109 Jetstream and J111 Sgrech resulted in them having to do turns in very little wind and were left at the back of the fleet, while Andrew Hall's J125 Jackknife lead the rest of the fleet around the course. But in the light airs it was the J80s Jailbreak, Harley Quinn and Jezebel that looked set to do battle with Will Partington's Honey Bee for the top spots. In the end it was James & Johnny Collins in Jailbreak that took the race, followed by Richard Cook's Jezebel, just 5 seconds behind and Honey Bee taking third place.

Race 7 of the series and wind settled to a steady 10 kts with the occasional gust of 13kts, bringing the bigger boats back into play. J111 Sgrech, helmed by Thomas Tudor took 3rd place, Peter Dunlop and Vicky Cox's J109 Mojito took 1st place still being chased for points by Jailbreak in 2nd place.

Brian Dixon's Parabia got off to a very good start, while many of the fleet were caught napping. Mojito managed to recover well and took 1st place on corrected. Followed by Honey Bee in 2nd place and Jailbreak taking 3rd.

Last race of the day and wind anywhere between 8kts and gusts of 23kts, coupled with wind shifts of nearly 40 degrees, made for challenging racing. Mojito and David Lean's J109 Jeepster got off to a fine start, while Jackknife were a little too keen and forced to return to the line. Round the first mark, kites up and Mojito pulled ahead. Jackknife managed to make her way back through the fleet to take line honours with Mojito taking a convincing win on corrected time, over 5 minutes ahead of Dave and Sarah Leather's J80 Harley Quinn who were 30seconds ahead of Jailbreak in 3rd place.

Mojito lead the series, increasing their lead to 5points ahead of Jailbreak, just one point ahead of fellow J80, Harley Quinn.

Racing continues in two weeks time with 3 races on the 13th October and 2 on Sunday the 14th. All boats, and anyone interested in crewing, are welcome. More information and full results on the club website at www.PwllheliSailingClub.co.uk